Friday 6/27/14 I took a couple newbies out for their first time diving for abalone in California. Sure I suppose there are much gentler and more easily accessed dive sites, but I had a spot in mind that I suspected would be holding at least one trophy 10″ abalone, and if it meant putting a couple newbies through a sadistic hike to the access point well that was a price they would have to pay.

Early in the morning we arrived at our trail head and began the arduous hike down the bluff and along the beach. Wearing wetsuits and carrying gear we hiked mile after mile pouring in sweat and dying of exhaustion. Even knowing that this was only the hike down to the site, breakdowns, panic attacks, and tantrums ensued. As usual I rolled my eyes in disbelief of the drama queen-like antics displayed and reminded everyone that we were almost there and that everything is fine and no one was dying. After what felt like a graduate degree in clinical therapy, we arrived.

I suited up and threw out some sage advice on dive set ups before leaving the two guys to recuperate on the beach and prepare for an easy water entry and calm water dive.  Visibility was decent but not amazing and it didn’t take long for me to run into a large lingcod and a big black rockfish. I ran them both through. I’m always a little bothered by the behavior and eyes of the lingcod. They often come running up to me as if begging for a treat, they also have large forward facing eyes and I can’t help but infer emotions. I look into their big expressive eyes and then watch them twitch and die as I bleed them out.  It makes me wonder if puppies would taste as good.

I continued the hunt and soon found an area where the abalone were all well over 9″. In a short period of time I found a 10″ ab, a 9-15/16″ ab, another 10″ and a 9-3/4″. I had already taken a 9-1/4″ so the 10″ and almost 10″ went to me and I called over my buddy Nick to take the remaining 10″ and big 9″. Paul needed a little bit more guidance but also popped his first limit of abs, two 9s and an 8. I spent a good bit of time explaining dive technique and demonstrating how to properly use the iron to remove an abalone but eventually both the guys got it and were able to take good sized abs in water as deep as 20′. They were elated and we headed back to the beach to tag the abalone and prepare for the hike out. We would be taking a different route to get back to the car based on the false pretense that this route would be easier, it wasn’t.

I wish I could tell you guys exactly where we dove just so that you could appreciate the brutality of the hike out. Suffice to say we hiked sans trail straight up the bluff to highway 1. After reviewing Google Earth this morning I see that we climbed 600′ in about a 1/4 mile. The first portion of the climb being substantially steeper than the second. Once again panic attacks and “near death experiences” ensued. Even today I find myself dizzy from Friday’s excessive eye rolling. Without doubt, it was the most painful hike out I have ever done after a day of diving. When I finally got to the top of the hill with all my gear and maybe 40-50# of ab and fish I dropped it all and went for a quick jog to go get the car so the guys wouldn’t have to wait too long when they made it up. Neither of the two newbs had taken me seriously when I told them to get a good night’s sleep the night before, instead showing up at my house at 11pm and 1:30am for a 6:00am start, I took the opportunity to remind them of the value of good night’s sleep. Hehehe

When asked if I think the grueling hike was worth the trophy abs, I respond “probably not, after I ran into those two kayakers in the water it occured to me that there were far easier ways to get to that site”. Lol.

P.S. When we got to the top of the brutal climb, the more vocal newbie pulls out a grapefruit sized rock and starts telling us how interesting it is. I said “You just picked that up right now, right? You’re f*cking with us?” He wasn’t and he didn’t seem to fully understand our dumbfounded laughter. 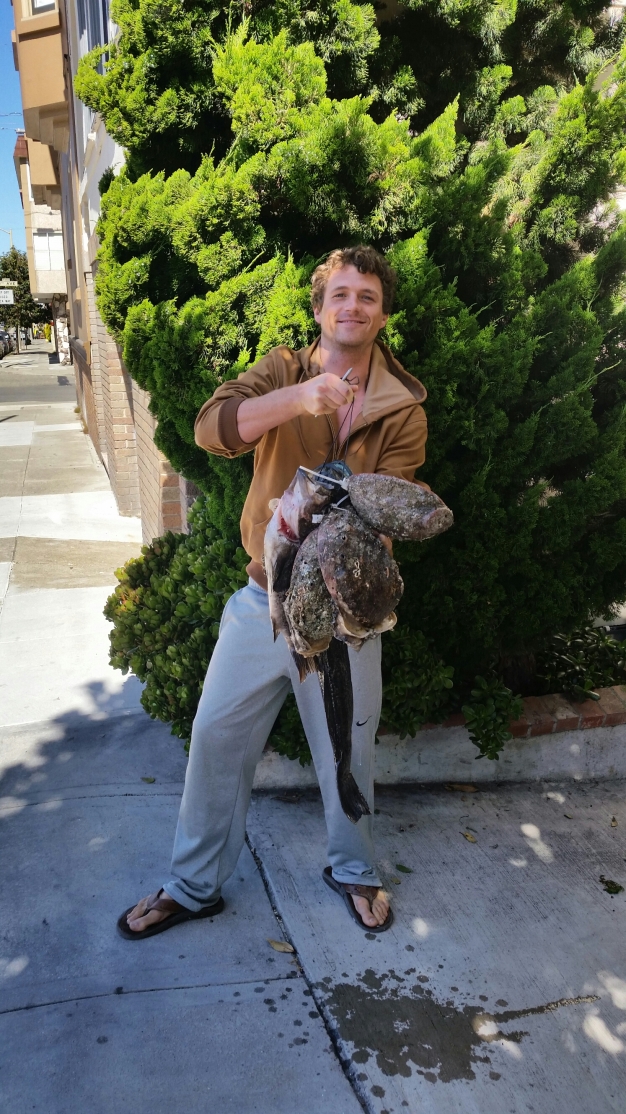